12/16/2009 1:19:00 PM
a weapon? if so what is it and why? as a female living in the city i think about this often. i never felt that i couldn't protect myself if i was faced with some type of hand to hand struggle but the more violent things become i am def. rethinking this.

12/16/2009 1:26:00 PM
I used to carry an assisted-open Gerber hand knife everywhere. After misplacing 2 of them, I decided not to make the investment in a third. I probably should have.

Get some OC spray if you're concerned about your safety. You should never carry anything with you that an attacker could easily use against you and cause permanent or fatal damage.

12/16/2009 1:38:00 PM
when i get my permit i will. my neighborhood is lousy. i cant walk my dog around the block without getting propositioned to fight him or bantered... so i don't anymore, which sucks. i have 2 automatic switchblades in my purse and a louisville in my car for the time being.

12/16/2009 1:44:00 PM
pepper spray is some evil stuff. i've been in a bar in the proximity to it before and was coughing the rest of the night and my lungs were messed up for a good day or 2. definitely not bad to have handy.

I want to start carrying pepper spray. I just don't even know where to go about getting it.

12/16/2009 1:55:00 PM
You should also be really careful if you're going to be carrying the spray around the kids. If you wind up using it in a pinch, the overspray may wind up hitting the baby; and as you can imagine, that can be devestating to a young person's developing respiratory system. Train yourself how to use it outside where wind is a factor.

12/16/2009 1:57:00 PM
i thought about this too but obviously i'd only use it in a situation where handing over my material possessions was not enough for someone and they wanted to take it a step further.

lauren, i see it in army navy stores...i want one that attaches to my keychain on a zip line so i can easily grab it...especially if i am carrying the baby. when i leave in the morning it's dark.

i'd be surprised if AN didn't have the keychain. my girl has one and i'm pretty sure her fiance got it there.

12/16/2009 2:11:00 PM
knives don't work that well if you think about it--you're looking at about 4 inches of edge and striking ability so you would have to close the distance with the other person and if that person is wearing any clothing it'll reduce your ability to get a cut that would deter them (try stabbing a steak with a towel over it to get an idea of the amount of force you'd need to really hurt the other person).

get that gnarly pepper spray--good distance and even if you miss it still works to cause them to gag.

12/16/2009 2:24:00 PM
Pepper spray is definitely your best bet. They also sell canisters of it in the form of kubatons that can double as an impact weapon should you need it.

Kimber® Pepper Blaster® is the new name for Kimber's Guardian Angel® pepper spray. (This item has been renamed and rebranded by Kimber.)
This powerful pepper spray weighs just 13 ounces, and is sized for carry in a pocket or purse. It also clips easily to belt or waistband. With a 13-foot range and 90 MPH delivery, it stops threats at a distance.
Watch Demonstration Video by Kimber

The new LifeActTM Pepper Blaster is the most advanced non-lethal self defense tool available today. It renders conventional pepper sprays obsolete and stops threats at a safe distance. Small, light and ergonomic, it carries easily in pocket or purse, and an integral clip also secures it to a belt. The outer body conforms to either a right or left-hand grip, and fits almost any size hand. The Guardian Angel contains two cylinders with powerful concentrations of near pharmaceutical grade OC (oleoresin capsicum), a devastatingly effective inflammatory agent. Driven by pyrotechnic charges, the solution travels at 90 MPH with little chance of cross-contamination, and with enough energy to wrap around glasses or penetrate a face mask. Effect is immediate and lasts for up to 45 minutes. Unlike conventional sprays, the Guardian Angel does not lose pressure over time.

Instantly incapacitates an assailant.
Much more effective than sprays.
Revolutionary propulsion operation.
Jet delivery minimizes cross-contamination.
Delivers two powerful blasts of OC.
Conventional trigger is shielded by swing-away safety tab to protect against accidental discharge.
The Pepper Blaster is effective at distances up to 13 feet. At 90 MPH, the charge travels too fast for an aggressor to avoid. Effect is immediate, and lasts up to 45 minutes

Push the safety tab away. Command threat to stop.
If threat advances, aim and pull the trigger.
Observe reaction. Aim and fire again if necessary.
Move quickly away from threat. Call the police.
Pepper Blaster Details

Important: Before purchasing any Kimber LifeAct product, it is the responsibility of the purchaser to determine and comply with all applicable federal, state and local laws and ordinances. NO SALES TO NEW YORK, MASSACHUSETTS, MICHIGAN & WASHINGTON DC.

Other states where pepper sprays may be restricted or regulated: Wisconsin, California, Hawaii.

The above list of states where pepper sprays are restricted is for illustrative purposes only. It is not exhaustive nor is it intended to provide legal advice. Laws and regulations are subject to change. Before purchasing or using any Kimber product, it is the responsibility of the purchaser to determine and comply with all applicable federal, state and local laws in effect at that time.

12/16/2009 2:32:00 PM
i never think of it when we're at army navy and husband is ogling guns, but i wouldn't mind having some pepper spray.
i can't imagine knives would be really effective, i just happen to have them in there. if i had nothing else, i'd give it a whirl... right to the ding dong.

what kind of "safety features" do those things have? i can foresee reaching for my garage door opener and wacking myself right in the face with that stuff.

You can see that plastic part on the top, it's not the button its the cover. Also, check out the legality of those switch blades.

Carry that kimber instead

when i get my permit i will. my neighborhood is lousy. i cant walk my dog around the block without getting propositioned to fight him or bantered... so i don't anymore, which sucks. i have 2 automatic switchblades in my purse and a louisville in my car for the time being.

your a bad bitch!

what kind of "safety features" do those things have? i can foresee reaching for my garage door opener and wacking myself right in the face with that stuff.

12/16/2009 3:31:00 PM
Where do you guys live? This just made me so sad, not scared though, more confused. I live is West Philadelphia and I walk all over my neighborhood (54th Street and East, Springfield up to Lancaster, sometimes). My boyfriend lives in the Art Museum Area and I walk up to his house from center city around 3 am very, very often. Old city, Northern Liberties, "Portfishington," I've been scared maybe twice in the last eight years of these adventures. I've never been hurt, approached or even near an incident. Aside from my brother's Discman being stolen from him on the el in 1999 and my neighbor being jumped for $40 in 2002, I've never even heard of anyone I know getting robbed or accosted in any way in Philadelphia. Good karma? Or exaggeration on the parts of outsiders?

Originally posted by: JessiSnow
I live is West Philadelphia born and raised, on the playground is where I spent most of my days. Chillin out maxin relaxin all cool, shootin some b-ball outside of the school, when a couple of guys who were up to no good, started makin trouble in my neighborhood. I got in one little fight and my mom got scared, said you're moving with your auntie and uncle in Bel Air...

your a bad bitch!


also, my town for the most part, is pretty nice. just not the part i live in. all the hoods think this is brooklyn or something and it's not uncommon to see shady happenins and hear a few shots on a late summer night. hopefully buying a house soon and getting the hell out of here. big money big money! no whammies! no whammies!!!!

If you ever have to use a knife against somebody and you haven't taken any knife combat classes, go for the face. If you do that, hold your weapon in a reverse grip (shown below). You can throw blows, and even if one of your punches misses, chances are your blade won't. One solid punch to the face followed by a quick stab into the neck should disable your attacker. 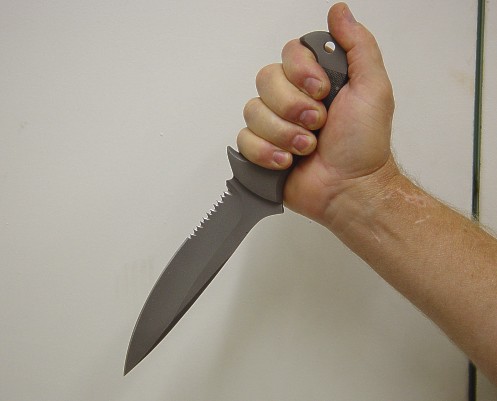