maylene and the sons of disaster

Voice Of Reason - 'Looking Back To The Way Things Were: The Complete Discography 1995-2001' 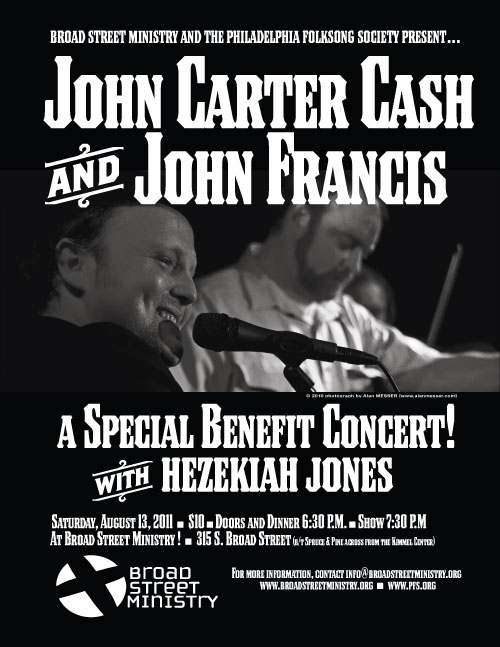 PRETTY GOOD SHOW FOR ONLY 10 BUCKS!

All the way from Nashville, John Carter Cash (Grammy and 3-time CMA Award Winning Producer and Singer/Songwriter and son of Johnny Cash and June Carter) and John Francis (Philly-Native and 2-Time recipient of ASCAP's National Lyricist Awards) join forces for an evening of original music and songs celebrating the legacy of Johnny Cash and the Carter Family.

Opening the evening is the incomparable Hezekiah Jones.

7/22/2011 3:48:00 PM
can't come out to this really great show? consider donating at our kitchen project website, we are trying to finish this thing so we can get back to cooking for the masses

3-time CMA Award and 5-time Grammy winning singer/songwriter/producer (and only son of Johnny Cash and June Carter) comes to Philadelphia accompanied by Philly's own native son, John Francis! The two are on a short tour of the Northeast, following a performance in Dyess, Arkansas at the ASU Convention Center which is hosting the Johnny Cash Festival; an event to memorialize and restore Johnny's childhood home. Cash and Francis are playing back-to-back shows at Steel City Coffeehouse on August 12 in Phoenixville, and in the Broad Street Ministry Sanctuary on August 13, in Center City.

Francis and Cash have collaborated on stage several times in recent months after in Nashville, where John Carter produced Francis' critically acclaimed new record, "The Better Angels". Writing and performing songs together has come naturally to the kindred spirits. A standard of their live show is "No One Gets Out of Here Alive", a reminder of the shortness of life and the importance to "love pure strong while there's time", in the dying words of a father to his son. Also watch for "Folsom Prison Blues", among other songs by Johnny Cash and the Carter Family in the set.

Cash's latest album release, 'The Family Secret', (with 2 Cash/Francis penned songs) is a well-kept secret itself! No Depression says, ".dark lyrics, elements of traditional country, folk, piano rock, and old-school metal.a totally unique sound." Rolling Stone gave the record an admirable 3 stars. John Carter Cash has proven again that he is his own man who holds his vast musical talent in personal vision in tandem with his role as keeper of the Cash / Carter legacy.

As the Philadelphia Daily News said, John Francis' music is "Ripe with the honest questioning that we used to count on guys like Bob Dylan and John Prine to serve up."

ASCAP honored Francis with not just one, but two national lyricist awards for two of the songs on "The Better Angels", The Sammy Cahn Lyricist of the Year Award for the song "Love Came To Me Dressed In Red", and the 2010 Jay Gorney Award for socially conscious lyrics for the song, "Who?" It's no wonder that Francis's sharp, eloquent songs - which draw on everything from high and lonesome bare Americana - to rollicking barroom rockabilly - to gritty story-songs- has won him an enviable pack of industry admirers.

Philadelphia Weekly got it right, "(with "The Better Angels") Francis brings a gun to a knife fight."

Sue Devine, Head of TV/Film for ASCAP, hit the nail on the head declaring John Francis a "Madman genius songwriter; full of heart."

Jim Wallis's Sojourners magazine said, "Like the best story-songs from Bruce Springsteen, the tale and the telling haunt the listener."