The Bash Festival Took Over NJ 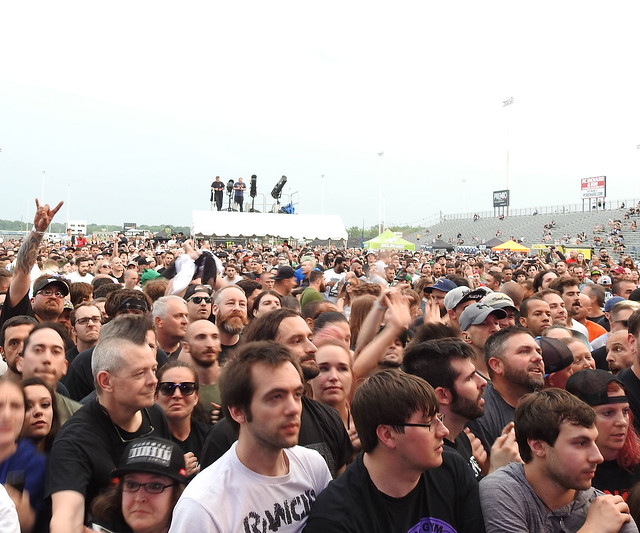 The Bash Festival took over Raceway Park in Englishtown on Sunday, starting off with 4 hours of craft beer tasting from breweries like Bells, Dogfish, ManaFirkin, Yards and many more. The music portion took place on the mainstage in the middle of the drag racing track and started off with NYHC legends Madball.

The crowd was packed with oldheads and younger fans for a diverse mix that was equally receptive to Madball's set. Frontman Freddy Madball spoke between songs about how hardcore bands are finally starting to be acknowledged and booked on US festivals. The band played a set that worked through much of its discography, mainly focusing on the classic material. At the conclusion of the set, the festival was briefly evacuated due to the threat of impending severe weather. The weather would spare the festival for the time being, as L7 took the stage only 15-20 minutes later than scheduled.

The punk vets blasted through material on their early 90's albums Bricks Are Heavy and Hungry For Stink while also playing a track off of their new album Scatter The Rats. The crowd stayed energetic and receptive throughout the set, and that energy sustained as Suicidal Tendencies took the stage. Their set largely focused on their seminal self titled record and while overall a shorter set, very familiar in scope to their opening set for The Misfits last year.

The band's stage presence was super energetic, and only enhanced by the addition of former Dillinger Escape Plan guitarist Ben Weinman. Drummer Dave Lombardo is always a thrill to witness live, his hard hitting yet effortless acrobatic drumming is always a highlight regardless of what band he's playing for.

Pennywise ripped through a 13 song set that touched upon almost every album in their storied discography, and the crowd really came alive up front and in the pit. "Fight Til You Die" ignited circle pits and loud crowd sing-a-longs while guitarist Fletcher Dragge encouraged everybody to keep turning up the energy. Ending on crowd favorite and set staple "Bro Hymn", the stage was set for festival headliners Rancid to hit the stage.

However, the earlier impending severe weather reared its ugly head, allowing Rancid to get in four songs before the festival made the decision to shut down due to heavy rain and lightning. While some may have been disappointed, the day was a rousing success and a fantastically ran festival model that I look forward to in the future. The next stops for The Bash in the coming weeks are in Idaho, Washington and California and I suggest you check it out!